I’d had my eye on a mixer at Wal-Mart for a while, it was more expensive than a hand-held mixer but that was fine by me. I’ve never been good with a hand-mixer, I always get tired and bored, when I was younger I was always so desperate to help out in the kitchen and that was always the first task given to me. Before long I would give up, claiming my arm was tired from holding it and that the batter was mixed well enough (it never was). Enter the standing mixer: throw in the ingredients and walk away for a bit. Or at least just stand there, not having to hold anything.

I finally caved and decided I would buy the $40 mixer. I was a tad concerned about the brand, I had a blender by the same company and it was not the greatest. The mixer was gone, it was no longer on the website. I found it on amazon.ca- along with the horrid reviews. I no longer wanted it. At all. Well, not that particular one anyways. I found a better one from a better brand (Sunbeam). Although it was more expensive, it seemed better than a mixer that would break as soon as it was out of the box.

I found it in-store at Wal-Mart, which at first seemed like a great thing! I did not have to order it online and wait patiently by the door! No, instead I got to lug the giant thing home. My arms still hurt 2 days later.

I was ready to bake! But what to bake? I had bought some Greek yogurt- in my ongoing quest to find a better substitute for butter- so I was set on making a cake/cupcakes instead of cookies. A quick glance over my Pinterest board and I decided on a gingerbread bundt cake with a coffee glaze. Only problem was I did not have enough eggs (I was fine with the lack of a bundt pan). On to plan b: I was now set on something gingerbread-y as I scoured my board. My eyes landed on gingerbread latte cupcakes. Bingo! Only I did not have the ingredients for the icing. Plan c: make the cupcakes and use the glaze from the first recipe, compromise. Plus I could finally use some of the molasses I still had sitting in my drawer since the last time I made gingerbread cookies- three months ago.

The mixer was great. While it combined the yogurt and sugar, I could measure out the dry ingredients- saving myself some time, fives minutes is five minutes. The mixer came with various attachments, one of which was whisks- the recipe called for a lightly beaten egg, a great excuse to use the whisk attachment, albeit as a w whisk, not as a mixer attachment. Because I was using Greek yogurt instead of butter the batter was runnier than usual and it worried me. I added a little bit more flour, but that barely made a difference. I decided not to mess with it anymore and just bake it. 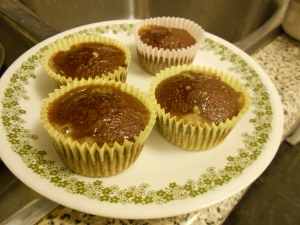 Soon the house was filled with the smell of gingerbread. As soon as they were out of the oven I was tempted to eat one. I withheld and waited until they cooled to pour the glaze on them. The glaze was easy to make: just add powdered sugar to a couple tablespoons of hot, strong coffee and mix. The glaze just poured down the cupcake and pooled around the edge where the cupcake met the liner. Some of it stayed on top though. I figured if the cupcakes were cool enough to glaze I could eat one. The problem was that the wrapper stuck to the cupcake. I blamed this on the lack of butter. I was wrong. It was that they were still too warm. When I had one the next day the wrapper came right off. Two days later they are still so soft and delicious, a bit chewy (I blame the yogurt) but damn good. This recipe is a keeper. I am not 100% sure about using Greek yogurt as a butter substitute however. I might just make tzatziki sauce with the rest.