The boil water alert was still on. Apparently traces of E .coli were found in the water and so we had to boil it. Even something as simple as brushing your teeth became a hassle as you had to make sure you used boil/bottled water. This being our first full day on vacation (i.e.: the vacation munchies had yet to surface) I was game for going running. Turns out running in Florida, even at 8 in the morning, is a less than stellar idea. Marianne and I ended up walking most of the route, turning our run into a (much cooler) nature walk. We saw so much nature, at times too much nature for me to handle. I did fine not know that there are spiders in Florida the size of my palm; I could have lived the rest of my life not knowing of these nightmare-inspired creatures with their giant webs. Thankfully they hang out higher up in the treetops, away from human faces that are liable to wreck the webs and lead to spider-stomping. Not helping matter were some vultures sitting high atop in the trees, it was as if they were just waiting for me to collapse from heat exhaustion.

As we walked we could hear the peacocks off in the distance (they run wild in the park we passed through) making a huge ruckus. There was a trail along the paved path for people on horseback- just about the worst place for a turtle to bask in the sun, yet there we saw one. We approached it slowly so as to gently scare it towards the canal. The stereotype about turtles being slow is a lie. This little guy was hoofing it towards the canal. For the grand finale he slid down the bank and splashed into the canal water with an epic *plop* that made my day. As we continued we saw more vultures, this time however there were about 10 of them circling an area: a turtle smooshed by a horse, an exhausted runner? We’ll never know, it was too hot to go investigate.

Passing by Flamingo Gardens we saw two red parrots, a male and female. For some reason they flew towards the Gardens, where the peacocks were being obnoxiously loud. Marianne mentioned that there was a parrot display at Flamingo Gardens that had free admission, alas we were there too early yet we were outside too late. At this point, as we headed back, it was unbearably hot. I would like to point out that is was barely 10am and it felt like high noon at the peak of summer.

There is nothing like working up a sweat and nearly getting heat exhaustion to motivate one to go lounge by the beach. We made lunch and packed it up for eating on the beach. My sandwich was epic: almond butter, peanut butter and cranberry preserves. As per my caffeine addiction, we stopped at Dunkin’ Donuts so I could fill up. Happily, they had a new donut: key lime, I was overjoyed, even more so when Marianne informed me that key lime pie is the official pie (dessert?) of the state of Florida! It was delicious, how can it not be? Lime= good, donut= good, crumbly bits on top= good. Something I had (apparently) forgotten to mention when petitioning for a Dunkin’ Donuts pit-stop was that the reason I was so in love with the place was solely for the drip coffee with a flavour shot, and to a lesser extent the donuts (doesn’t beat Tim Hortons). Everyone else had ordered fancy espresso based beverages and then walked away surprised that the flavour was subpar.

Dania Beach was pristine and just gorgeous with a blue sky and nothing but sunshine. I dipped my legs to cool off after setting up the umbrellas and chairs. We were serious beachgoers (as apparently everyone is in Florida) with two giant umbrellas secured in place providing the necessary shade and a cooler for our waters and sandwiches. There is nothing worse than a warm bottle of water in 30+ degree weather.

While dipping my legs, I found a coconut that had washed up on shore. I found a giant rock, lifted it over my head and threw it down. With comic timing, it bounced off the coconut and landed beside, barely missing my foot. Turns out the coconut was soggy, so I instead adopted him and he sat by our umbrellas, helping keep one of the towels down.

I tried to lie on my towel in the sun, listening to podcasts but this proved to be a difficult endeavour as the sun was trying to bake me. Even with a hat over my face, I could not take the heat. I retreated to the shade where after a while… it got cold! Shocker! I tried to go back to my towel, but the wind had picked up and was blowing sand all over me, so I took one of the chairs out into the sun, a nice compromise. I was half asleep in my chair (watching pelicans and the Coast Guard fly by put me to sleep) when everyone returned from the ocean. They were shouting and half took off running down the beach. I turned to look and what do you know, the umbrella I thought was more secure (and thus had been paying less attention to) had been blown away. The wind had drastically changed direction. Thankfully the wind was nice enough to not blow any sand onto our lunch.

The wind was so strong the birds could not fly, they were stuck hovering in once place, trying so desperately to fly against it, both sad and funny. A storm appeared on the horizon soon after lunch, but it went out across the ocean and then back to land further north. It had completely bypassed us it seemed. Except it looped back around and came straight for us, threatening not just rain but also lightning. We packed up and left.

On our way back we stopped at Jaxson’s Ice Cream Parlour for a little treat. Little is an understatement. The smallest size ice cream scoop, the kid’s size, was 1/4lb. I love ice cream, but that seemed a bit much to me. Camilla and Lucy saw the economic value in sharing a banana split and thus the Great Debate began. They were almost at the window and wondering if they should rehearse- and they forgot their order. Everyone else ordered and they went last. I was nearly in tears, laughing at the size of their banana split when it was handed over. It was enormous, easily too much for 3-4 people. Their flavour choice was not that great: strawberry (tasted too much like bubblegum), pina colada and caramel. Clearly I was the winner with a giant scoop of rocky road. Not only was it made freshly in-house, it had real marshmallows in it. Where else can you get that? Bonus points for including a plastic drip tray to hold my cone in. No sooner had I walked away from the ordering window, my ice cream was already half melted. The whole thing was a messy, sticky affair. While we ate we laughed about the epic salad Lucy had at the cottage, proving she has a propensity to order too-large dishes. 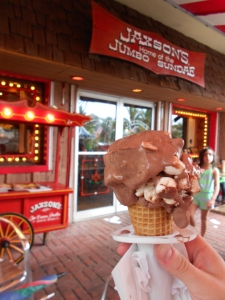 As we drove, our ride was interrupted by a one-car train, but it was so cute you could not get mad at it. We made another pit stop, this time at the humane society. It was heartbreaking to see all those animals. We got to pet the tiniest little kitten I have ever seen, it kept meowing and it took all my self-will not to adopt it and take it with me in my carry-on luggage. While there we found a cat with my name, as well as two that looked like our cat back home: Mruczka.

It felt so good to shower when we got back; there was a whole layer of sand mixed with sunscreen stuck to me. Turns out I had not put enough sunscreen on my belly, as it was red and sunburned. We got some aloe from the garden. It felt cold and slimy on my belly, but it also provided relief. I was torn.

Kazik (one of the cats) had caught a lizard outside on the patio and was batting it around. He would periodically pick it up by its head and carry it in his mouth. He would chase it, bat it, and carry it around- but not eat it. He had just eaten his dinner and was not hungry, so Ela and I taught him not to play with his food by setting the lizard (remarkably unscathed) free.

We had another super-Polish supper, with zapiekanki (grilled cheese with mushrooms) for the main course. For dessert we had the greatest idea ever. You see, Nutella is not exactly healthy, bearing more than just a hint of cocoa. We fixed the health factor by spreading it on strawberries. It has now become a staple in our diet. The day ended on a high note, while playing Bohnanza we found out that the boil water alert had been lifted. Our area had been unaffected by the e.coli!

Posted by kanysh on June 25, 2013 in Adventures of Pinka!, The Roving Reporter, Travel