I was not going to chance it again with terrible in-room coffee; I went out to Walgreens in search of breakfast food (and food for the fight) and McDonald’s for coffee. Along the way I had a craving for a McSundae- apparently McDonalds doesn’t serve ice cream during breakfast hours, not sure why, the machine is right there. I ended up eating some of my plane food, rainbow coloured goldfish crackers (they just tasted like regular goldfish crackers).

As we planned out our day we found out that the hotel we were in was ON Route 66 (pre-1937, but still it counts for something). We planned it so that we would drive along as much of old Route 66 as we could back to Albuquerque. There weren’t any signs telling us that we were on Route 66 and there was really not that much to see. We ended up driving a bit too far along it, but we caught it and did not have to backtrack too far to get to the I-25. Soon enough we were back on pre-1937 Route 66, it was just open landscape, no strip motels or gas stations, just trees and fields running alongside some train tracks.

Soon enough we were back on Central Ave (aka Route 66) in Albuquerque. The lamppost had a banner hanging from it: Route 66, Doggone Cool. We tried to go to The Grove (Breaking Bad stop #9) for some chamomile tea with Stevia, alas it is a really popular place and we just happened to be there on a Sunday during brunch on the closing weekend of Balloon Fiesta: it was a zoo. The place was completely full; any open space was filled with lines of people getting stuff to go. We walked in, looked around, turned right around and left. Up next we stopped at the Coronado Mall so I could get in some requisite shopping- only the mall was closed, it was only 10:30am. The only store that was open was Dick’s Sporting Goods, where Brent took his sweet time picking out a pair of running shoes. We figured the mall had to open at 11am, right? Wrong: we wandered the mall like old people, eating a giant (twice as big as the usual giant ones) white chocolate macadamia cookie. Finally a few department stores opened and off I went in search of cheap goods. All the other stores followed suit around noon. I spent two hours searching and all I got was 1 shirt, a sassy Nike shirt that said: chase this. It wasn’t a total loss, but if Macy’s had opened earlier we could have left sooner.

I was so hungry, but it made more sense to go get the car washed first, at where else but Octopus Carwash. There was a huge line, but it moved really quickly and we were through in no time. As the car was cleaned, we walked through and gawked at all the Breaking Bad stuff, but the vending machine was nowhere to be found, there was another one but it had a glass front and was therefore horrible for a stash. The car came out shiny and squeaky clean, no more smooshed bugs on the windshield, no more red mud all over.

Finally we were going to get something to eat: Breaking Bad donuts, called Blue Sky. While not featured on the show, they looked delicious and we could not resist. We ordered a half dozen (Blue Sky, Homer, red velvet with chocolate icing, Azteca with cinnamon and chili, French toast and birthday cake). The craving was unbearable; we sat right down and ate 2 donuts: the Homer (pink icing and sprinkles) and the Blue Sky (white icing and blue rock candy). Both were delicious, and you could tell that they were freshly made. We had barely made it to the car and already the French toast donut had started greasing through the box.

Donuts are not lunch or dinner, they are dessert. In keeping with the spirit of getting things out of order, we drove to Venezia’s (Breaking Bad stop #10) for a roof pizza. The plan was to order a pizza, have one slice each and eat it cold for dinner later. What we did not anticipate was the green chile, pepperoni and Canadian bacon pizza being piping hot. The box did not have the Venezia logo on it, and the pizza was cut into slices but it still counted. We tossed the pizza in the backseat and headed to Breaking Bad stop #11, Garduno’s for made-at-the-table fresh guacamole. Finally we were going to have lunch. I was starving, and the pizza smell wafting in from the backseat was not helping matters. Driving along, we passed an abandoned roller coaster behind a Taco Bell, it was really weird and out of place.

While we waited for our pizza we had found a list in a newspaper of Albuquerque’s best of’s. Garduno’s was voted best margarita, and glancing over their drink menu I could see why: they had about 10 different margaritas listed. Luckily Gardunos’ was not busy at all; they were just closing out their brunch menu and starting on lunch/dinner. To start I had a pink margarita, but our waiter took the menu so I had to remember another one. Only after placing my order did I see that they had a champagne margarita, alas it was only available during brunch.

The guacamole made fresh at the table seemed like a good idea at the time, only we had a really awkward waiter and now had to sit there while he made our guacamole for us and made small talk. He popped by a few minutes later to ask how it was. He kept saying “cool, cool” in response to everything. It was worth the awkward because the guacamole was amazing. Instead of free bread, there chips & salsa: we almost made the mistake of getting a second basket. I ordered a chicken dish that had red chiles, during our whole trip I had yet to encounter them and would have been remiss had I not tried them. Red chiles are much spicier than green. My second margarita (a blue margarita, it was the only thing I could remember) arrived shortly after our food. It was giant, twice as big as the first one. It was also a blended frozen one, and much sweeter, garnished with coconut. It would be dessert: a dessert that would make my ribs freeze and hurt, prompting me to ask why I don’t get brain freeze like other people. I walked right into it when Brent said it was because I don’t have a brain.

We stopped at Target alas I could not find the grey boots I was looking for and I came to the conclusion that I cannot pull of wearing moto-boots. The soda selection there was just awful. Trying to get to our hotel was a bit tedious, as we had to wind through the airport but that is what happens when you get a hotel right next door to the airport.

No sooner had I plotzed on the bed, watching Bruce Almighty, it was time to get back up. We had to go to the gas station, fill up the tank and return the car to the rental agency. We stopped at the gift shop downstairs wherein I found the motherload of souvenirs: a Route 66 shirt, Route 66 postcard and with my purchase I could get a hot-air balloon pin for a penny! Score! After returning the car we sat waiting for the hotel shuttle that was supposed to run every 15-30 minutes. At the 45 minute mark we gave up and took the airport shuttle, and from the airport took the hotel shuttle. 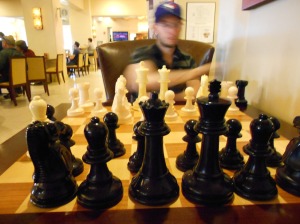 Before going back to the room I demanded we play a game of chess. In the lobby they had a table with GIANT chess pieces set up and I could not stop thinking about it.  Somehow I managed to lose at chess, it did not help that I did not know the more complex rules such as “castling” and other such things.  Eating a slice of pizza and half a donut while watching The Amazing Race turned out to be a bad idea- my stomach started hurting really bad. We had wanted to watch The Walking Dead, but for some reason it was shown at a different time. And our back-up show, Family Guy wasn’t open because of baseball. Going to bed at 9pm is not such a bad idea when you have to get up at 4am the next morning to catch a flight home.

Posted by kanysh on November 16, 2013 in Adventures of Pinka!, Travel