Somehow I had it in my head that steak frites was a steak cut into fry-shaped strips, even though we’ve ordered it plenty of times before. Le Select Bistro was voted as best steak frites and so we found ourselves walking along Wellington, in a section of Toronto we had never been to, even though it was one street south of Spadina and King. I was psyched about this dinner, even though I could barely read the menu online thanks to French and horrible cursive font. 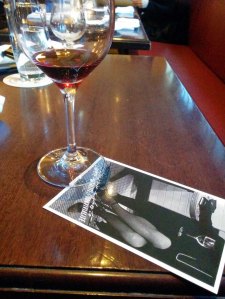 Voraciously hungry and tired from walking, we ended up ordering an appetizer to split. Usually this ends up spelling disaster as we wind up with too much food, poor dessert gets left behind. Not this time. I had seen on the menu that they have creme brulee (my all-time weakness, after cookie dough). The appetizer was a head-to-toe pig terrine. They were not lying. I am pretty sure there was a pigs blood sausage in the centre. 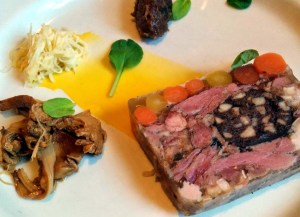 Brent’s steak frites dinner looked hilarious, the pile of fries dwarfed his steak. I giggled, but it may have been the wine. I won by a mile with the venison on top of pureed sweet potatoes. One bite of the puree and I thought to myself: why doesn’t sweet potato every taste this good when I make it?! Brent had the exact same thought. You could say we had a psychic moment. Or we are both bad at cooking sweet potatoes. 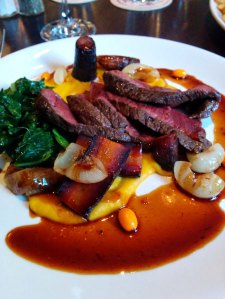 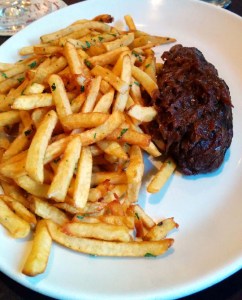 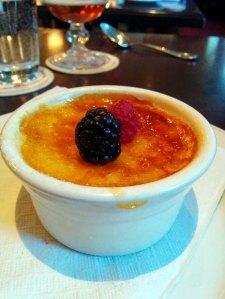 * there, now you know another little thing about me: I have my bar tender certification 😉

Posted by kanysh on March 25, 2015 in Diary of A Tourist: in Her Own Hometown, Fooding