We lucked out, it was family Day and that meant that the National Gallery of Canada would actually be open unlike on a regular Monday. On our walk back to the hotel yesterday we had passed a place near Byward Market called Planet Coffee, what better place to get my morning coffee fix from? Checking their Facebook page I discovered that they were going to participate in a hot chocolate competition at the market! I was way too excited about these prospects.

It was still cold out, a cool -21C but the weather report promised it would warm up as the day wore on. I caved into temptation at Planet Coffee and got a mocha with whipped cream, they were after all entering a hot chocolate contest therefore it must be good. Right? It was delicious and if it was any indication of the quality of their hot chocolate, they had the contest in the bag.

Byward Market was very small and not at all what I had expected. There were only a few vendors and it was just two rows of them. We peered down at them from the walkway above and decided that the wood-fired oven Montreal-style bagel place down below seemed like a good place to grab breakfast. It was fun to watch the bagels cooling near the oven, and it raised my hopes for breakfast. It was a really popular place and there were no free seats. The hot chocolate contest was only being set up, we decided if we had time we could pop by later.

The herb and cheese bagel was amazing and it was crammed full of smoked meat, egg and cheddar cheese. My only regret was not having a drink on the side. By the time we were done breakfast and packed up the temperature had risen to -19C, a cause for celebration- even though we were walking one block. Still that one block was a cold walk, I only had on one pair of tights and one pair of socks and I did not double up my long sleeve shirts. We would be walking around a gallery for a few hours and it would be way too hot.

We had double lucked out at the Gallery, it was the last day of the Monet show. After having been to many art galleries I still do not understand contemporary art or colour block painting or any of the other weird stuff. We did get to see some gorgeous Inuit art pieces, the most miniscule carvings imaginable and it boggles the mind. This was the first time in a gallery or museum where I did not end up freezing cold. We managed to finish the Gallery in three hours, earlier than we had expected. 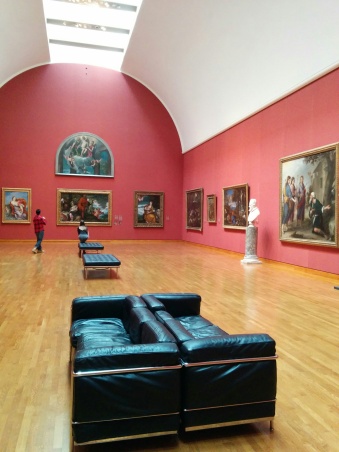 We went to Dunn’s for smoked meat sandwiches. But we had so much time that Brent suggested we get the sandwiches for later and go elsewhere for lunch. Hooch Restaurant did not open until 5pm. There had been an Irish pub on my list and as Brent was about to look up the address to the Aulde PoorHouse I saw it across the street. The hot chocolate contest across the street was well under way and we figured it would make a good dessert option afterwards. We were in an Irish pub so of course I had to get the BBQ Guinness chicken wings. It was too early in the day for drinks, instead I opted for a green tea with lemon which was perfect after all the cold weather. The spicy curry chicken with fries was also delicious.

They had managed to take down the event tent and everyone had cleared out. As we left the pub it was as if the hot chocolate contest had never even happened. They had vanished without a trace. Instead we stopped in at Sugar Mountain where I went a little overboard. It was a long slow walk back to the train station, my legs were dead. The stupid highway made our route quite inefficient as we had to make a giant detour to get around it. It made me mad because I could see the hotel near the train station yet we had to go all the way around, adding on an extra 15 minutes that felt like eternity.

In the train station Brent opened his smoked meat sandwich from Dunn’s and the pickle smelled so good I had to open mine and eat it, after all the pickle might make the sandwich soggy. I could not resist a bite of the sandwich. It was underwhelming to say the least, which is too bad as thus far all of our fooding had been quite good. The WiFi in the train station was lackluster and I was getting antsy. It did feel good to sit though. It turns out that being really cold really does a number on one’s body and is exhausting.

Posted by kanysh on February 27, 2016 in Adventures of Pinka!, The Roving Reporter, Travel, Uncategorized