A Whole Month Has Passed?! 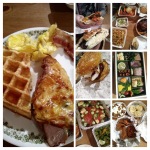 Somsun Superstar: voted best new cheap eats 2019. Bosnian sandwiches. I had no idea this was a thing. Now I know. The bread was delicious, but that’s about all I can say. I was decidedly not a fan of the meat. In both the classic which had very little toppings, and Brent’s sandwich- it was a tiny bit better but still not enough.

Labora: Toronto Life Top 100 restaurants. So much food! So much more than we had expected! The paella was great and we only ate half. Can’t go wrong with shishito peppers but I still maintain that my sesame-soy ones are better. Steak sandwich was the clear winner though. The sweet potato bites were awful and pushed to the side. Too crispy and kind of tasteless?

Le Petit Dejeuner: voted best waffles. I was skeptical for many reasons. Waffles from a non-waffle-specialty place? No crazy options to pick from? Combined with it being delivery, I had my sights set on the challah toast croque monsieur and the waffles were just an afterthought. I was wrong to doubt. The waffles were perfect, so buttermilk-y and they didn’t even need anything more than maple syrup. But that croque monsieur, *drools*, it stole the show. It also set the day up weird because we ate so early.

Union: Toronto Life Top 100 restaurants. The polenta was not what I expected. Not even close. I was expecting something with the consistency of mashed potatoes, with tomatoes on the side. This was a spongey brick. And with so much food, it got pushed to the side. Duck fat toast was amazing. The ribs were sticky and delicious and just fell off the bone. Brent preferred the burger, I preferred the ribs so it was an easy swap after we each stole bites. The mashed potatoes (that we didn’t order?) were not good, too lumpy. And besides, we had a giant pile of fries to tackle. Fries do not hold up well cold. That had become our new criteria when we got too much food: triage it by preference and how well it holds up cold.

Friday Roots: I must have seen this one on Instagram or a Toronto Life article or who knows. My notes only say: fried chicken. I was intrigued by the sweet potatoes with marshmallows. I was picturing whipped potatoes with a sweet marshmallow crust. Not potatoes soaked in molasses with overcooked marshmallows sprinkled over sweet potato chunks. Pass. As usual, I was not a fan of the  burger. Burgers are a hard thing to pull off. The fried chicken was good, nice and meaty. But some bites were so, so, SO greasy. The biscuit was a bit soft and doughy for my non-biscuit-liking (I’m just not a fan in general).

Sushi Masaki Saito: this one had been on my list for a long time, Michelin-starred chef known for aged sushi. Yes please! Except, it was $500/plate. Maybe no. That is until I saw an Instagram post that due to the pandemic they were switching to delivery. They had a chef’s special, a selection of 8-10 mini-dishes for a measly $200. Yes please! Day saved! It took me over 10 minutes just to get through. Then the earliest I could order for was the following week. That is ok, at least I was in. Our dinner arrived in a cute little bamboo box lined with banana leaves. One look inside and I knew we were in for a treat. The mackerel was actually good!! Who knew that was possible?! The octopus was amazing. I liked chomping on the ginger. Everything was really good….but still not as good as some of the other places we’ve been to, even this year alone.

Rol San: voted best late-night Chinese food. Turns out my memory is terrible. We had eaten here before and we were not impressed. Nothing, not even when I bit into the fried octopus, no trigger due to my again not being impressed. It was chewy. I did like the nutty flavour. But fried food shouldn’t be so chewy. The congee was just awful. I mean we had to try it, it was from the 1001 Foods book. But now that I know, I am ok forever. Shellfish (in this case it was oysters) in black bean sauce were delicious. I particularly liked ripping them out of their shells. It was oddly satisfying. The hot & sour soup (also from the book)- not good. It was weirdly sweet, but like sweet-sweet not the kind of sweet that goes with savoury. The Singapore noodles were good. I really just kept going back for those and alternating the oysters and the orange chicken (that was actually more of a ginger chicken really).

If you had told me that fried watermelon would be the (so far) stand out dish of 2018 I would have thought for sure I was dreaming. Fried? Watermelon? How is that even possible? I still don’t know how it’s done, but I do know that DaiLo (voted one of the top 100 restaurants in Canada 2018) makes a damn good dish of it. That dish alone is reason enough for them to be a top 100 contender. The fried octopus tacos sealed the deal. DaiLo was amazing. 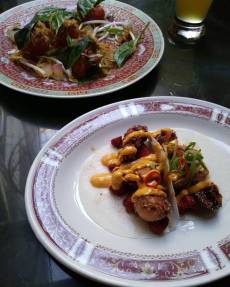 The pork hock was a mild dip. But that was our fault. It was just too fatty for our tastes- even though that is how it is supposed to be. Although the sauce was not that great either. The jellyfish slaw (which I had considered getting as an app) was a knockout though. 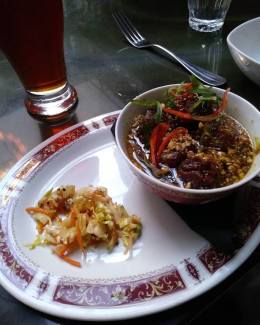 Our last dish was the babyback ribs and oh man- they were amazing. It was impossible to compare them to previous ribs we’d had because they were that different. They were topped with a delicious sauce that was unlike anything we had ever tried. We were back in knockout territory. Completing the experience was the old fashioned cocktail I had with a fancy whisky in it. Oh and the service was great. 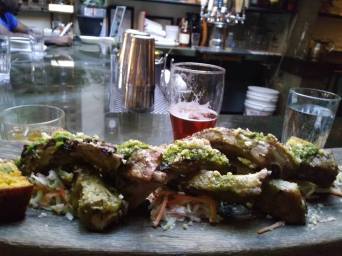 Up next in our rotation was the Top 100 list aka Canada’s Best 100 Restaurants*. All these years I’ve lived in Toronto, having walked by Nota Bene so many times and yet I’d never been. Now was my chance. Once our dishes arrived it absolutely made sense why it had been voted one of the best. You could tell the dishes were made with high quality ingredients. That being said, they kind of played it safe. Yes the dishes were good and well-prepared but they were by no means memorable or outstanding. All I can remember a month later is that my dish had rabbit in it and noodles.

We did also get to knock off another from the 1001 foods list: burrata. I was all for a cheese dish. When I saw that it was served with zucchini though I was quite skeptical. Turns out that it just tastes like cucumbers. All my life I did not know this. But I guess it’s never too soon to learn? The ratio of the dish was off. The main ingredient (based on the menu title) should have been the buratta, with just a touch of all the other stuff. Not the other way around. There were moments when I was eating just zucchini.

Looking at a photo it would appear that we had also ordered a charcuterie board. It was THAT not-outstanding.