Poutine For Dinner, But Dessert First

The craving for guacamole hit me out of the blue one day at work. Alas, best guacamole in the city is closed on Mondays and Tuesdays. I retreated in defeat, we would have to postpone fooding. Brent then suggested best late night poutine and on the way best Chinese bakery. It is hard to say no to poutine, in fact is nearly impossible. We had not been there for years, and now they had a new location and more menu options. Yes, i was trying to justify the outing.

Best Chinese bakery was Lucullus Bakery on Elm St. near the Eaton Centre. It is a good thing this bakery is relatively new, else I would have gone broke with such an awesome bakery so close to school. We ordered a nice range: espresso napoleon, coconut bear claw and a ham & cheese croissant. All three were outstanding and this has become a new favourite of mine.

As we were walking to Poutini’s on King at Portland we passed some bars. The pople inside were cheering wildly. What? Turns out the Raptors were winning in a play-off game. There was also a baseball game on at the time. Both were home games. Oh crap we thought, downtown is going to be a zoo!! We picked up the pace and rushed to Poutini’s. Thankfully there was no one in there. Brent ordered the works (sour cream, chives, and bacon) and I ordered the bacon poutine. The guy was on auto-pilot and made both the works. I was OK with it though. It was delicious and every bite I managed to get every topping. The tiny size was still quite large and towards the end I found myself claiming defeat. Poutini’s has improved over the years. I remember my chief complaint being that it was too salty. They have since fixed that. As we stood there eating (poutine is not amenable to walking and eating) a guy came in and declared his love for Poutini’s vegan gravy. I do not remember if he stayed and ordered, I was too busy chowing down.

Posted by kanysh on April 28, 2016 in Adventures of Pinka!, Diary of A Tourist: in Her Own Hometown, Fooding

Dr. Laffa’s had been voted best of Toronto in four different categories: best hummus, best falafel, best kosher restaurant, and best shawarma and one other either best new or cheap eats from years past. How great would it be to cross all of those off the list in one go? It would make having to take the TTC there worth it. I was secretly worried that it would be closed yet again. Thankfully it was not closed.

The food was cheap and plentiful, we ended up taking over two tables with all of our food. Turns out I am not a huge fan of falafels on their own. In the past they were always buried within a wrap with a tonne of other toppings. We ordered the falafel hummus plate- it made total sense. Alas, the hummus also fell short of my expectations. The best hummus in Toronto is still at Anataloia’s. However the shawarma was outstanding. It totally beats out any of the other shawarma’s I have had in the past. Part of it was the wrap, we had the laffa option. It was stuffed to the brim with meat and so many different veggies (I heard someone saying eggplant). It was the equivalent of a burrito, in that it was bursting at the seams with fillings. Were it not for the hours and the distance, the shawarma would be my go-to for lazy days.

Posted by kanysh on April 28, 2016 in Adventures of Pinka!, Diary of A Tourist: in Her Own Hometown, Fooding

Burrito for the Win!!!

An afternoon outing to the pub warrants some late night burritos of course. Keep in mind that “late night” for me is like 7:30pm. Trouble is that we ate so much at the pub we were nowhere near hungry. The following day however we were both having regrets, thus our dinner plans were set: late night burritos. We would not mess it up this time by eating too much beforehand.

I could have sworn that Burrito Boyz was closer to my house. At least they had the option to order online, I could finally be as picky as I wanted. Alas, it was only for large orders. But I had already made up my mind, this was going to be the perfect burrito therefore I would be that one annoying person who does not just order everything. I slowly named off the toppings I wanted which happened to be about half, so I couldn’t even save myself with “everything except for.”

I was wary of this burrito. Firstly there were way less options, only chicken, no other types such as baja chicken as I am used to at Fat Bastard Burrito. Secondly the toppings seemed to have been applied sparsely, I almost wanted to request more guacamole, she only gave me a small smear!! Then I took a bite. One bite and I was smitten. This was not just the best late night burrito, this was the best burrito period, in the city. The burrito sauce really made it. A new go to for us now.

Posted by kanysh on March 15, 2016 in Diary of A Tourist: in Her Own Hometown, Fooding, Uncategorized

We have managed to make quite a dent in the “best of” list from BlogTO, sometimes venturing out of our comfort zones and ingesting “food” like salads (or in Brent’s case, soup, which he inexplicably hates). Even still, we were barely prepared for this one: mac and cheese. A food neither of us is too fond of. So we called in help, my sisters, who love mac and cheese. The original plan was to order a dish of it and split it. But things started to crumble. Camilla was hungry, Brent wanted a sandwich. In total we wound up with an ungodly amount of mac and cheese in front of us.

We were at Victory Cafe for some pre-Snakes & Lattes food and drink (voted best pitcher of beer). Camilla and I had arrived early and snagged a table, inside the surprisingly (it wasn’t even 4:30) busy cafe. The waiter came over and proceeded to tell us about the rather extensive beer collection, we nodded along and after all that: did not order anything, choosing to wait for the beernoisseur (Brent) to arrive and help us out. We had no idea. None whatsoever. Getting antsy that everyone was taking so long to arrive, we decided on the beer written on a blackboard behind us instead. Heck, why not. Eventually the rest of the group arrived and one by one.. everyone ordered mac and cheese, or a sandwich with mac and cheese on the side. Maybe I was really tired, or just plain out of it, but for some unbeknownst reason, I ordered the grilled cheese.. with a side of mac and cheese. This was the greasiest grilled cheese sandwich I had ever seen, it was soaked. Yet somehow still crunchy. The mac and cheese was delicious, I managed to actually finish my tiny bowl of it. As per those who ordered it as a main: they gave the rest of us a show to go with dinner. There was so much mac and cheese on their plates. Camilla resorted to moving it around after eating half, just to make it look like she had eaten more. The beer was surprisingly good (we had gone with a red ale).

And now I am never ever going to eat any cheese for a really long time. As per mac and cheese, I may never eat it again. Holygod there was a lot of cheese.

Posted by kanysh on December 20, 2012 in Diary of A Tourist: in Her Own Hometown, Fooding

What is better than pulled pork? Oh, I don’t know, how about wrapping it in prosciutto? Think that’s awesome? How about then stuffing that inside of a pork belly and marinating it for 24 hours and slow cooked. Why, I believe you would be eating one of the city’s best sandwiches, and I am not just saying that because it was a heavenly delight. BlogTO and Toronto Life (and probably copious others) back me up on this. The sandwich is found at Porchetta & Co. on Dundas West and it is simply divine. All there is to is piles of meat stacked high between two buns, no veggie fillers or anything. So unbelievably mouth-wateringly satisfying, it seems like more than just a sandwich. 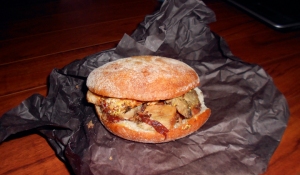 Posted by kanysh on March 11, 2012 in Adventures of Pinka!, Diary of A Tourist: in Her Own Hometown, Fooding, The Roving Reporter, Uncategorized, ~Food Reviews

Country Style Hungarian is a quaint little restaurant in Mirvish Village (Bloor & Bathurst). The restaurant is very cozy and has none of the pretension one would assume of a restaurant that was voted to have the best schnitzel in Toronto. Just to illustrate how low-key it is: the tables featured red & white checkered table clothes, as in like picnic blankets. The only other thing on the table? Paper place mats. We were expecting the place to be crowded with hipsters and foodies… and yet instead it was full of groups of friends and families and old people. It was a nice change to be honest. The service was really fast as well.

And the food? There is a reason this place was voted best schnitzel. Not only are the portions hefty (to say the least, just look at the hand in the photo for a sense of scale). There were also lots of options for schnitzel. You could get it as a sandwich or as an entree. The sandwich was the best kind of sandwich you could get. A giant piece of Parisian-style schnitzel between two pieces of unbuttered rye bread. Nothing else. No mayo, no veggies… just meat and bread. Notice the meat to bread to ratio. Two thumbs up. Brent had the weiner schnitzel. It was enormous. Not just in size, but also in taste.

I have eaten a lot of schnitzel over the years and this ranks up there as some of the best I have ever had. (There is no competing with homemade at home).

Posted by kanysh on December 19, 2011 in Adventures of Pinka!, Diary of A Tourist: in Her Own Hometown, Fooding, The Roving Reporter, Uncategorized, ~Food Reviews