This is just a teaser, full story to come soon. Or in a month, I am severely backlogged here from back-to-back vacations. 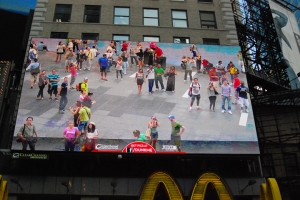 And now for a new segment called Hipster Round-Up.Everyone once in a while, whenever I feel like it (in keeping things hipster) I will post about fun & interesting hipster sightings! Mostly centralized in the Toronto area, more specifically Parkdale.

Along Queen Street today, we had many a hipster sighting, it being a Saturday and Parkdale being overrun with them. Were they out antiquing? Getting ice cream? Out & about because there is something secretly ironic about it and non-hipsters have no idea what it is but when hipsters see other hipsters walking along they nod their hats because they re in the know?!

Soon I will not be a giant chicken and I will photo-document these hipsters with my camera phone, in keeping with the theme.

Ah, I got a story for 3.) 250lb shirtless guy riding a moped downtown. Not hipster, but still worth mentioning.

And now a temp image, because I like when my stories are illustrated:

Posted by kanysh on May 12, 2012 in Hipster Round-Up, The Roving Reporter

I have been to the best cafe, nay, the best PLACE in the world, well, Toronto… EVER. The funny part is this: I didn’t even have any coffee or baked goods while I was there. So how can I claim that this is the best cafe ever? Especially if there is a $5 cover charge to get in? BECAUSE IT IS JUST THAT AWESOME. You pay $5 and then have access to 1,500 games! You get to lounge about and play games!!! And because you paid, it’s not like in a restaurant where they are desperate to turn you out so as to get more people in. They are not pushy like that here. Of course, I am talking about Snakes & Lattes, the brilliant idea for a place where you just play games. Who could not resist that?! I had walked by it almost a year ago with Brent and I thought the name was so clever that it made me want to go there. And then I found out about the games. And then (after my German-style board game addiction came into full swing) that they have copious amounts of German-style board games. I had initially thought it was just going to be basic simple games. But they had so many I had never heard of!

Hands-down the best game we played all night was Ticket To Ride. It is sort of like Thurn & Taxis but more colourful. Plus it was entertaining watching Brent lose the contest for longest train route by a 1-car train route! Hilarious. He came in last place. He would have been in second had he gotten the extra 10 points for the longest route. Because we had such a large group, 7 people, we initially had 2 separate games going. While we played Ticket To Ride, they played a 90s trivia game. Periodically we would overhear Lucy stumble on a sports question while Alex laughed. Then again. And again. It seemed she kept getting really obscure sports questions. We tried playing Settlers of Catan (which I am still hell-bent on playing at least once straight through) but the intrigue of a simpler game with a hilarious title, Fact Or Crap, drew us away. These facts were just as obscure, like “it is illegal to carry an ice cream cone in your pocket in Kentucky” (it was a fact).

We also started playing The Walking Dead boardgame but it got late and we had barely started so we bailed on it. It was funny because Camilla kept dying every turn, she never actually managed to move past her starting point. No one really knew what they were doing, but I can see it potentially being a fun game, so much so I almost bought it. But being a newly graduated starving artist, I thought better not.

One of the best features of Snakes & Lattes is the helpful & knowledgeable staff. If you walk in and are completely overwhelmed they will give you recommendations based on what kind of games you prefer (I was eavesdropping on a conversation, that’s what I heard) and they also come around and if you do not know the game they will give you a brief yet in-depth explanation of how to play. Sometimes they even check in on you to see if if all is going well! 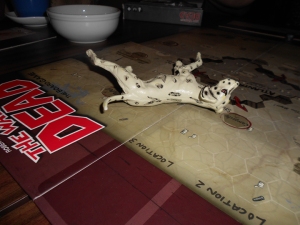 The tables are all marked by plastic animals. I swear, I spent the better part of the night moving that plastic dalmatian around the table and saying “bark, bark bark” which (for some reason) brought me great giddy joy. I was like a kid in a candy store. And they sell candy! You can buy a bowl full of assorted gummies, the best food around, duh. Of course, at some point, all that game playing will wear you out. They have sandwiches for that. Sandwiches that make you wonder if you do like brie cheese or not. The jury is still out, in small bits it was good, melted it was really good, in larger chunks, I don’t know. I will have to eat some more brie cheese in the future. And at the end of the day, when you can barely pry yourself away from the tables and you go to pay your tab- they sell the games at a way lower price than anywhere else I have seen!

Posted by kanysh on April 23, 2012 in Adventures of Pinka!, Diary of A Tourist: in Her Own Hometown, The Roving Reporter, Uncategorized