We had decided on an “end of summer BBQ” before everyone headed off back to school and we would never see each other again. Things were not going well. We forgot the grill and the poker stick. I had to run back. Which in 30+ degree weather just about did me in. Then it was incredibly windy and hard to light the fire. Finally we got the fire going. The flames were green but that is OK, they were still hot. 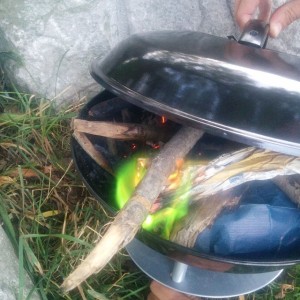 Why was it so windy? Because a huge storm was brewing. We had barely gotten things going when we had to pack up and go. A huge storm-front with menacing clouds and lightning was moving in fast.

For the BBQ I had made Mississippi Mud Cake. It was a terribly messy affair and rather counter-intuitive. A cake with no baking powder or baking soda?! I was sure it was doomed to fail. The marshmallows   had all melted into one giant blob. They were delicious… but a little too sweet and decadent even for my sweet tooth. It’s one of those desserts that you can really one have one.

Posted by kanysh on September 8, 2014 in Cooking for the Apocalypse, I Will One Day Attempt To Make This

The most wonderful time of year has come and gone. Of course, I am talking about the CNE a festival of gluttinous food and entertaining shows. I was worried about this year, having cleared out a lot of the deep-fried goodies in past years. I was right to be worried. I had caved and decided this was the year of the deep-fried butter, but *gasp*! To my horror (relief?) they had discontinued it. All well and good, given that earlier in the day for breakfast (I got there at opening) I had a maple toast bread box from Fran’s (a newcomer on the CNE food scene). I did not expect it to be so good. The challah bread was like french toast taken to a whole new level, a deep-fried level. It was hollowed out to hold what else, bacon, an egg and a sausage, I was not too happy about the egg yolk. 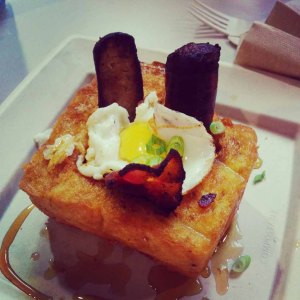 No breakfast is complete without coffee. Hula Girl (a relatively new vendor, much needed in the Food Building… some damn good coffee) was serving up a butter latte. Basically in place of milk you had melted butter, in place of sugar you had coconut oil. It did not taste that greasy, or coconutty. Honestly it just tasted like coffee, which can be dangerous, if like me, you need at least two cups to function semi-properly. The real runaway winner was the crobar (also from Hula Girl). Crobar= chocolate bar baked into a croissant. The croissant itself was damn good. Chocolate bar, damn better. I only wish I could have heated it up, but even still, bravo.

Things soon fell apart. The dog show was now sharing a venue with the acrobatic show. We ended up missing the dog show because we were eating lunch. I wish the lunch had been worth it. All day I was torn between cheeseburger nachos (only because the nachos came courtesy of the guys at Sneaky Dee’s), the Thanksgiving Waffle from Fran’s or bacon-wrapped cola chicken from Bacon Nation. I went with the latter. After a too-long wait I finally got my meal. And quickly wished I hadn’t. The cola sauce itself was really good. The bacon was scarce and the chicken, worst of all, rubbery. I got halfway through it and had to bail. There wasn’t even anything wacky deep-fried for me to drown my sorrows in. I did briefly consider the freeze-dried fruit sorbet, but the idea of paying $7 for something that *might* burn a hole in my stomach… pass.

Among the wonderful things at the CNE is the shopping.

A new addition to the CNE, much to my giddy pleasure: a fruit stand where you could drink out of the fruit!!! The one I went ot only had pineapple and coconut. I went with coconut. I wish I had not been too lazy to go to the other stand. They had watermelon there. Real coconut tastes awful!!

For our evening supper we went back to the Food Building. Camilla is stubborn in her corn-dog tradition. I was hoping to get cocoa chicken while she got her corn-dog, alas the line was way too long to warrant buying one piece of chicken. I did notice that one vendor offered Dutch Frites. Fresh off my vacation from Europe, still battling an addiction to Speculoos I went there eon the off-chance that they would have stroopwafel. they did!! And bonus points for serving it warmed up.

We could not find any corn-dogs in the building. Back out to the midway! The first place we saw offered Colossal Corn-Dogs. I salivated a little. Camilla noticed that they also sold regular-sized corn-dogs. Too late. I was going to get a Colossal Corn-Dog, and I was going to eat a Colossal Corn-Dog. About halfway through, i.e.: after eating a regular sized corn-dog, my grin started to fade. Disgust set in. My mouth was coated in grease but it was also a bit dry from all the salt. I had eaten way down to the stick and now my meal was a dangerous weapon threatening to pierce my cheek. So much for walking home.

This time we planned it right with a later lunch and we went to see the dog show. On the way we picked up some Tiny Toms Donuts (isn’t it great when you have an inside person who hooks you up with free stuff?). The Super Dogs are just so damn cute and entertaining! It took my sister and I all of 5 seconds to realize that a character in the show was the character Doubting Dave of the wonderful Canadian show Mystery Hunters. We could not decide if a bit part in the Super Dogs show was a step up or down.

In between my CNE visits I had heard that the Thanksgiving Waffle was amazing. I put my trust in those people and in the people at Fran’s and ponied up $10 and all my hopes of a good lunch. How could it go wrong? I also had a piece of cocoa- fried- chicken with me! Turns out it can go quite wrong. Firstly, while waiting for my food I noticed that they were using tubs of Ocean Spray cranberries *blech*. the real downfall of the Waffle was the waffle itself. I was expecting a regular waffle… NOT a waffle made OF stuffing! How am I supposed to eat around the stuffing?! Yes, I am not a huge fan of stuffing. It is overrated. On to the cocoa-fried-chicken… it just tasted like fried chicken. I was expecting fried chicken with molé sauce.

Dessert would fix everything. I had discovered that tucked away at the usual deep-fried Mars bar place they (somewhat) secretly had deep-fried cola! At last! After years I would finally get to try it!!! I was expecting little battered blobs that when I bit into them the syrup would pour out. I was not expecting cola syrup to be mixed into funnel cake batter. Don’t get me wrong, it was delicious and some part of it tasted like cola. But you cannot call that deep-fried cola!

. While shopping we found a book that was.. Polish!! We briefly contemplated getting our significant others the books, laughing riotously at the thought of them learning about barnyard animals with stickers. 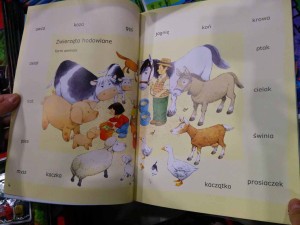 We decided to spend our money on skeeball instead.

(we both lost, but most importantly we had fun).

For lunch Camilla had been eyeballing deep-fried squid (on a stick, of course) but she hadn’t gotten it. She bitterly regretted it all day which is why that evening we found ourselves sitting outside the food building devouring a superbly greasy squid. The batter that fell off onto the sidewalk left giant grease splotches around it. It was the second/third best food of the CNE (crobar and maybe behind maple toast bread box).

We had gone to the CNE a second time for one main reason. To fulfill a childhood dream. It may have taken us 13 years but goddammit we finally got see Hanson in concert!

Posted by kanysh on September 8, 2014 in Adventures of Pinka!, CNE, Diary of A Tourist: in Her Own Hometown, Fooding

The best macaroni and cheese had recently been updated. It was no longer at Victory Cafe. now it was now at Gabardines. This time we came back with a reservation. Even still, the hostess seemed confused and had to run back and check with some other people. Despite having just had mac & cheese a few weeks ago, I was game to have some more.

They had the option as well to add smoked ham on top, why not I thought? I lived to regret that, it made the dish even heavier than it alraedy was. The first half was tasty, even if it was a little bit too cheesey (yes, there can in fact be such a thing). Towards the end I really got sick of it and the ham was not helping. Mac & cheese very quickly tips over into too much, it is not a gradual thing. I joked that I would wind up lactose intolerant after this meal.

Gabardines was OK, but nothing really special. I had a bite of the chicken and waffles that Brent ordered, again it was tasty but not outstanding. It is a rather fancy-looking place, you cannot really walk in and get a table. It also was not the best mac & cheese, it was good, but not the best. For the best you have to wait until the last two weeks of August and go to the Food Building at the CNE. There you will find the Mac & Cheesery, the deep-fried mac & cheese balls are to die for. Little bites of cheesey, noodley, crunchy, greasy heaven.

Posted by kanysh on September 1, 2014 in Diary of A Tourist: in Her Own Hometown, Fooding